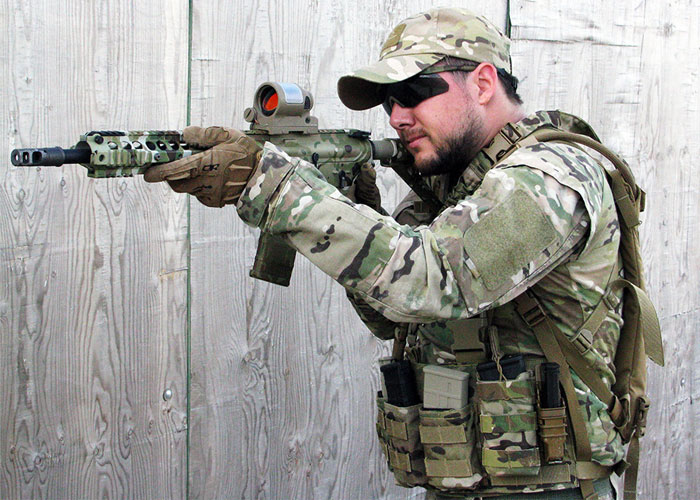 The SRS-style Red Dot Sight from JJ Airsoft is the spitting image of the SRS01, one of the few reflex sights sold and produced by U.S. manufacturer Trijicon. One of them, or at least its airsoft replica I was able to review here on Popular Airsoft: the JJ Airsoft Reflex Red Dot sight.

The latest is probably the best airsoft replica of a real steel reflex sight I have ever tried.

But ever since I knew that JJ Airsoft were thinking about producing the SRS I was really looking forward to get my hands on it! 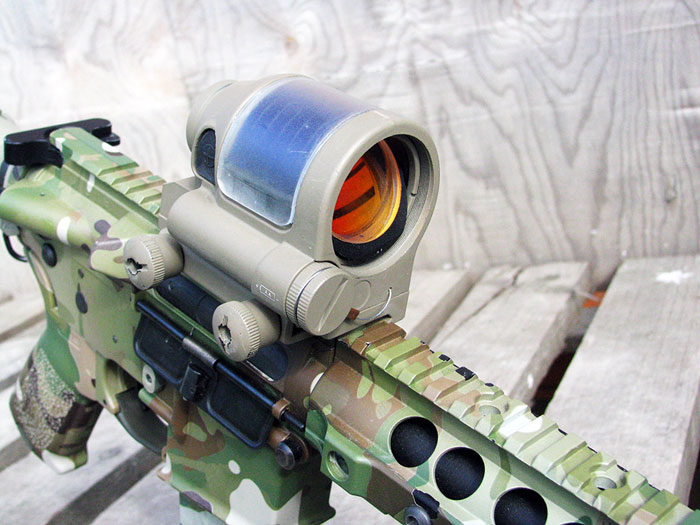 Its design was only part of what made me so curious about this reflex sight, since it had a different approach. It even looks kind of odd-shaped and even big and bulky when compared to other red dots out there on the market.

Also, the weight is something to have in top of your mind since it weighs 450 grams, 120 grams heavier than its real steel counterpart that only weighs 310 grams. It’s a sacrifice that could only be justified by two things: ruggedness and quality of the reticle/lens.

The first one I can just say upfront that is worth its weight, as this is one heck of a sturdy red dot. It feels like a tank and it also performs as one as I’ve treated it badly while transitioning from primary to secondary, going through obstacles or bumping into walls and windows while I was aiming with it. 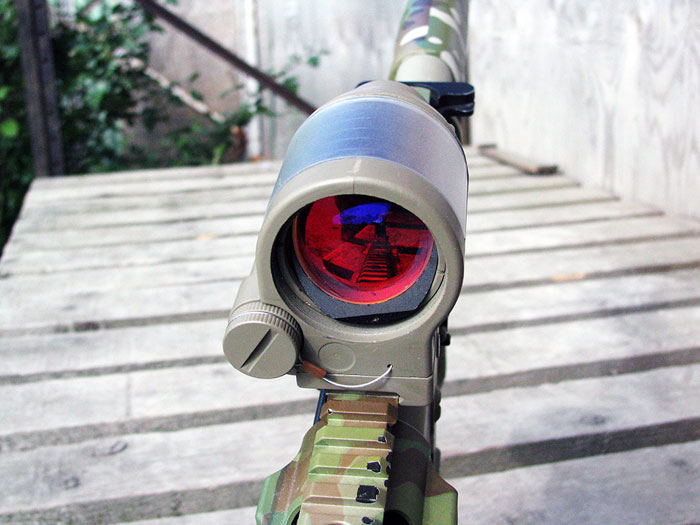 The strong aluminium construction surely does live up to its weight. Another thing I’m really happy about is the fact that the tan paint simply seems to endure with every mistreatment from me and the terrain we were on.

Size-wise it is taller than most red dots and slightly wider. However, there is a benefit to this: the lens diameter and the wide unobstructed field of view, which brings me to the next point of this review: the lens and the reticle. 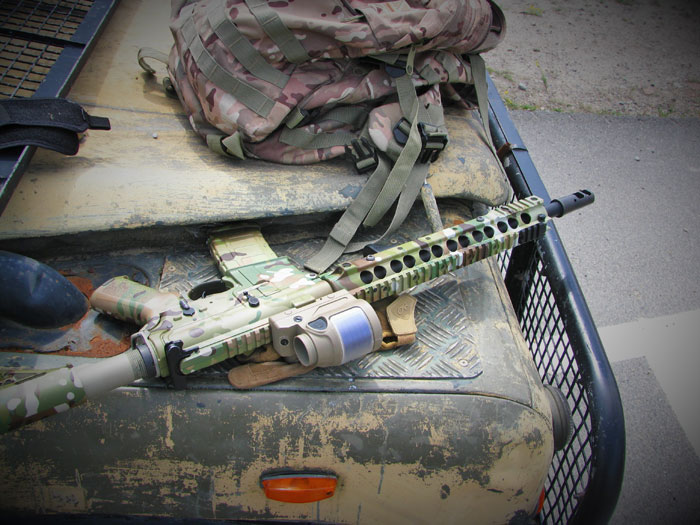 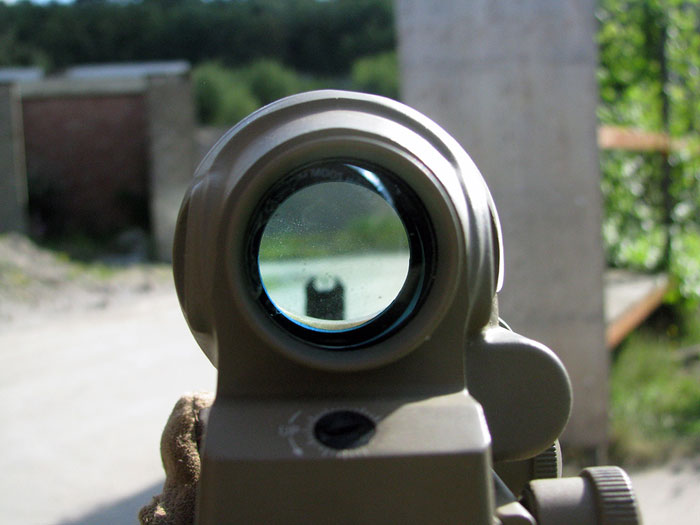 This is the real and ultimate benefit of this reflex red dot and my anticipation of it couldn’t have been more justified as it is super clear and crisp. There is almost no tinting on the lens, as you can see from the images and the video. Thus the image is extremely clear and bright, making the experience of using both eyes one of the best, if not the best I’ve ever experienced from an Airsoft red dot.

Furthermore, the diameter is just great to effortlessly acquire short to mid-distance targets. 38 millimetres does make a difference if you wish to use both eyes open but that alone isn’t enough. You need the best lens and a bright and crisp red dot which you do get on the JJ Airsoft SRS style red dot. 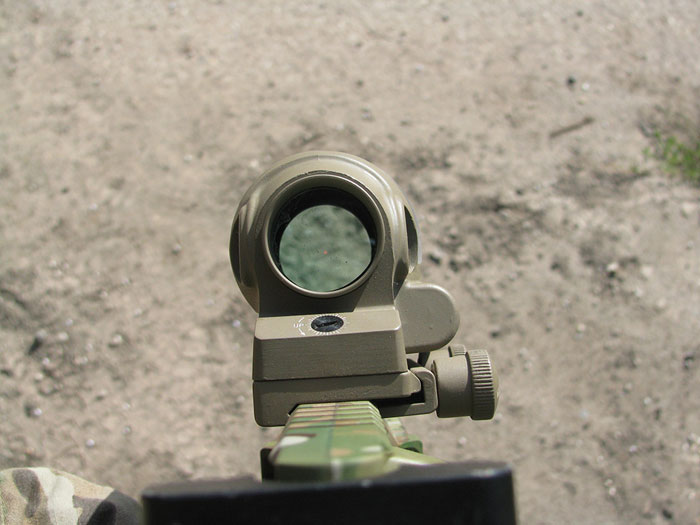 The reticle is very bright even in broad daylight. It is very crisp and clear making it the perfect match for the crystal clear lens that JJ Airsoft have included.

It does have a slight image displacement effect to the lens caused by the fact that the front lent has a slanted angle which helps with the red dot projection and avoiding those annoying reflexes. However, this is nothing but a minimum effect that on my opinion doesn’t really have any effect on the overall performance of the red dot. 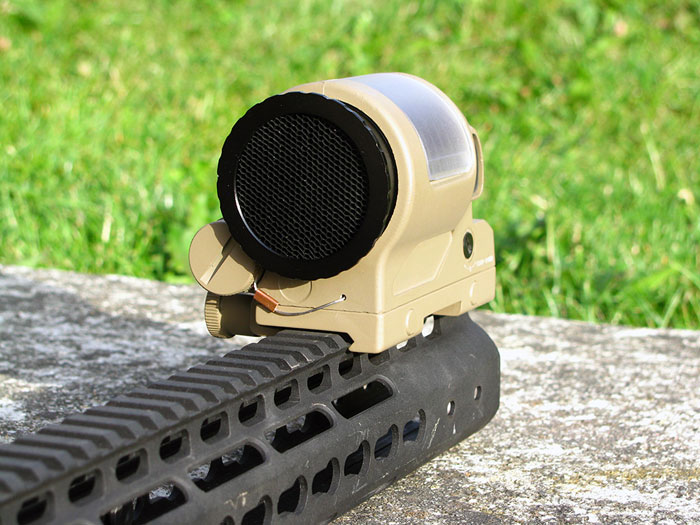 JJ Airsoft sell two versions of this SRS red dot: one with the kill flash and the other one without. Because of the size of the front lens and the obvious red flash produced by it I strongly suggest you get the kill flash version. Not only is it extremely easy to attach, it also effectively protects the lens against any BB impact as it’s made of very sturdy aluminium and does have a nice thickness that will withstand tens of BBs.  The mesh pattern spacing is perfect as it allows me to see through it without losing much image quality or making the image too dark. It also does a great job of totally concealing the red flash created by the reflex lens.

If by now you’re used to running a red dot, the operation of the JJ Airsoft SRS is very similar and straight forward. 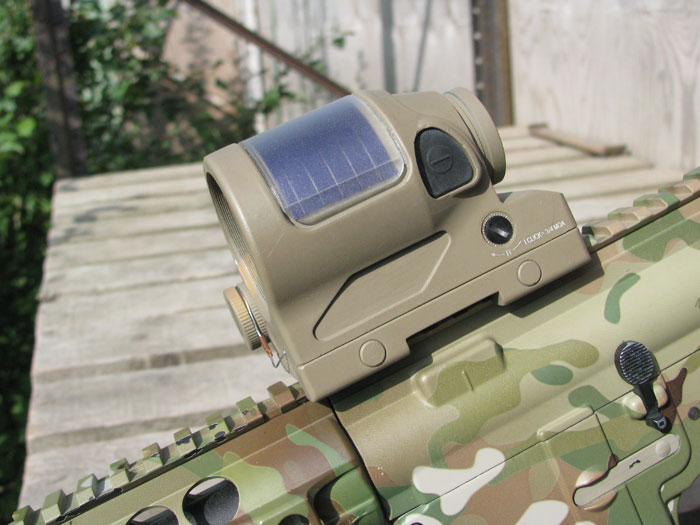 In order to power the red dot you can just go with the solar panel, but you’ll need a sunny day to get to see it and then it’s not bright enough. At least that was my experience. So I always ended up using the AA battery that can be installed on the right front side of the optic. I got a really strong and visible red dot that works great even in very sunny days. Believe me when I say that the photos don’t make any justice to the brightness of the dot. 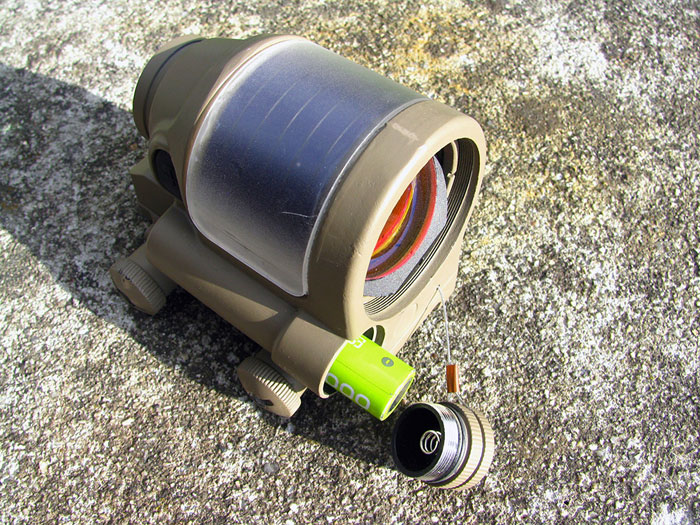 To turn it on, just press once on the minus or plus rubber buttons present on the sides of the sight. These produce a real crisp and solid feedback and enable you to set the brightness level to one of the possible 8 brightness levels. 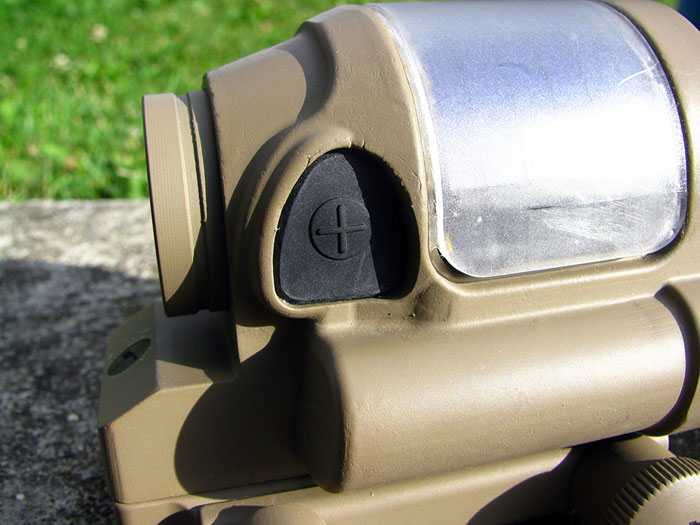 The JJ Airsoft replica doesn’t memorize your last setting, however.

To turn it off just press and keep pressing either buttons until the red dot disappears.

Windage and elevation adjustments are present on the left side and back of the optic respectively. These are adjusted in small increments by using a small screwdriver. Adjusting the red dot is quite simple and effective, meaning that it works and you can see the red dot moving clearly, making it easy to zero in. 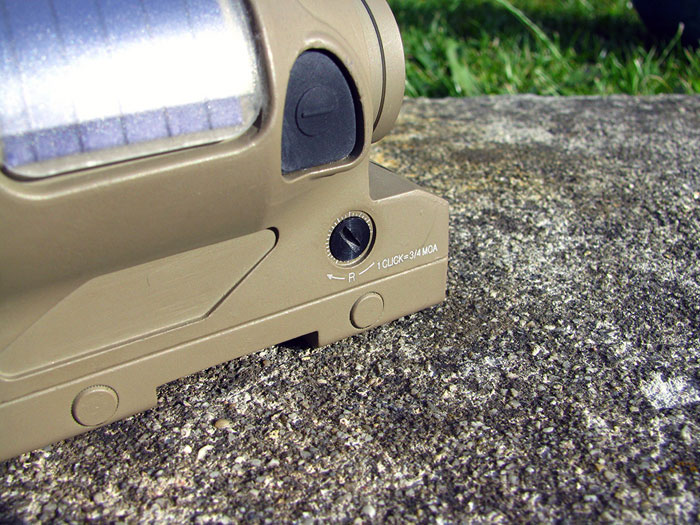 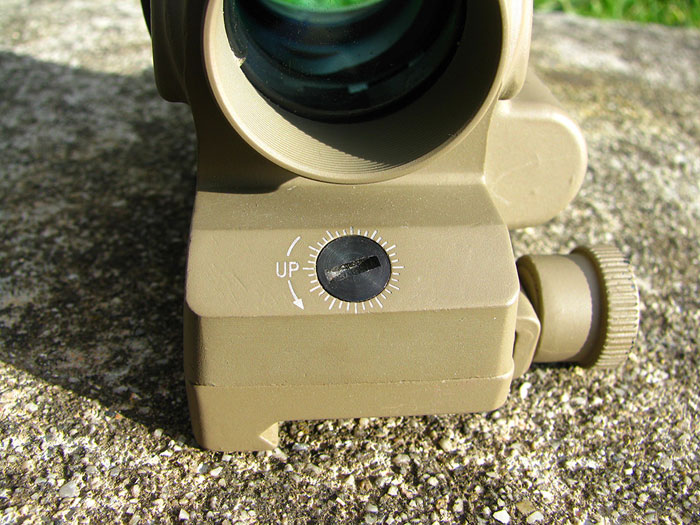 The mount is just like the real steel, featuring thumb screws that are a breeze to use making installation super simple and tool free. 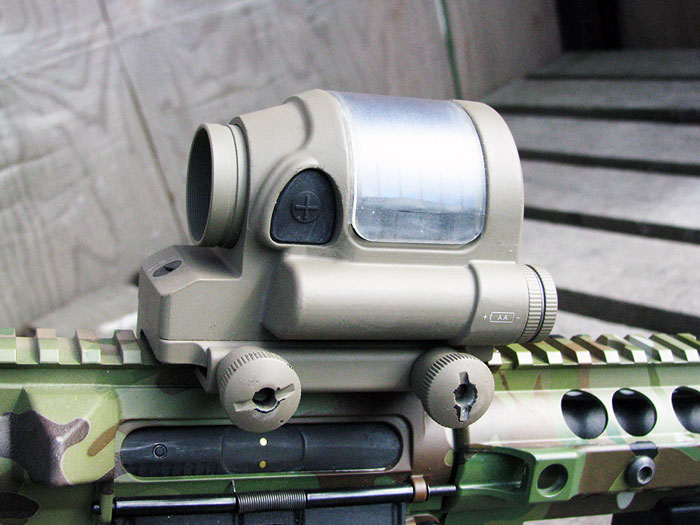 The JJ Airsoft SRS Red Dot Replica is in fact one of the best airsoft red dot replicas out there, period. With clear wide lenses and a terrific build, this is a dream come true where we as airsofters no longer need to compromise on dark tinted lenses and dimmed blotched reticles.

The JJ Airsoft SRS red dot is available in Tan for $94.99 and Black for $89.99 with Killflash included or less $5 without the Killflash. 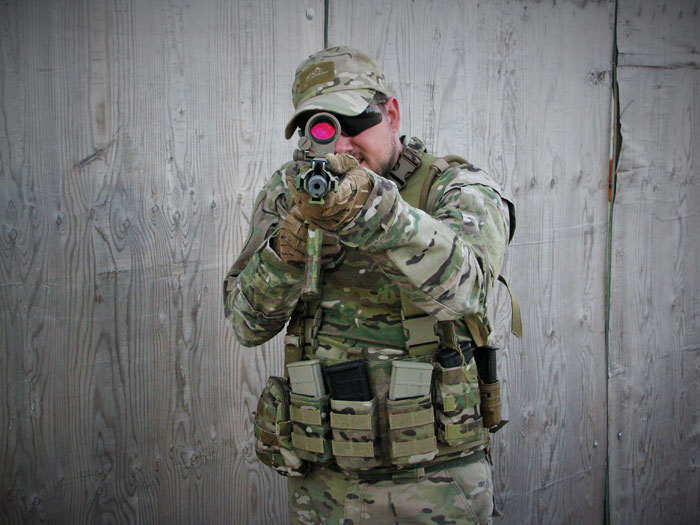