As a follow up on finding gear to make your loadout lighter (please refer to the December 2008 Popular Airsoft Magazine issue), I was lucky that Mil-Force (MF) was able to recommend one of their products to further lighten down the load. The Mil-Force GS-6 Tactical Rifle Sling (available only in black for now) that was given to me for a quick review does the job in an excellent manner.

The MF GS-6 Tactical Rifle Sling should not be mistaken for a chest rig, as it certainly not one. It is made for convenience. On its own, it will not help the warfighter fight the long battles, but mainly short and swift ones. It does not sport mag pouches for you to store extra magazines, your blast belt or operator belt should handily do this chore. I would readily recommend this for CQB and short skirmishes where you will need at least one or two magazines to be able to fight head on and be nimble enough to move around and squeeze in tight spaces. For the real world, SWAT and PSD teams would love to have one of these in their kits. 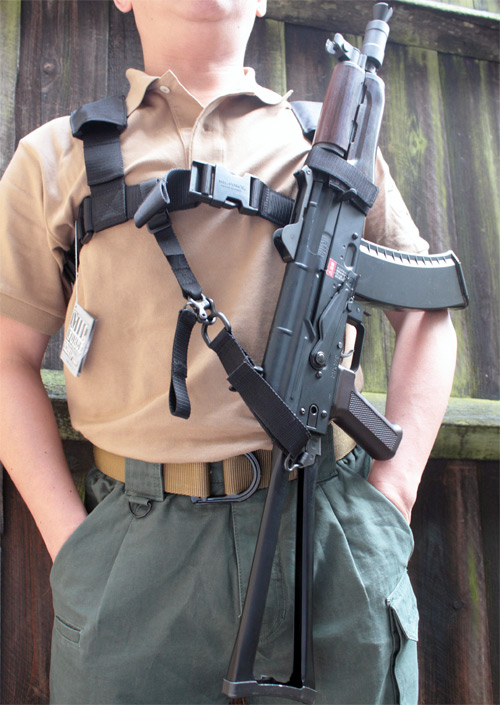 It should be used with short rifles such as carbines, SMGs (MP5s), short shotguns, and AKS74U. While not in use, you can secure the rifle's front end to a velcro loop keeping your hands free to do other important stuff.  You can immediately swing into action with its quick release features such as releasing it from the sling and velcro loop. A very handy tool indeed. 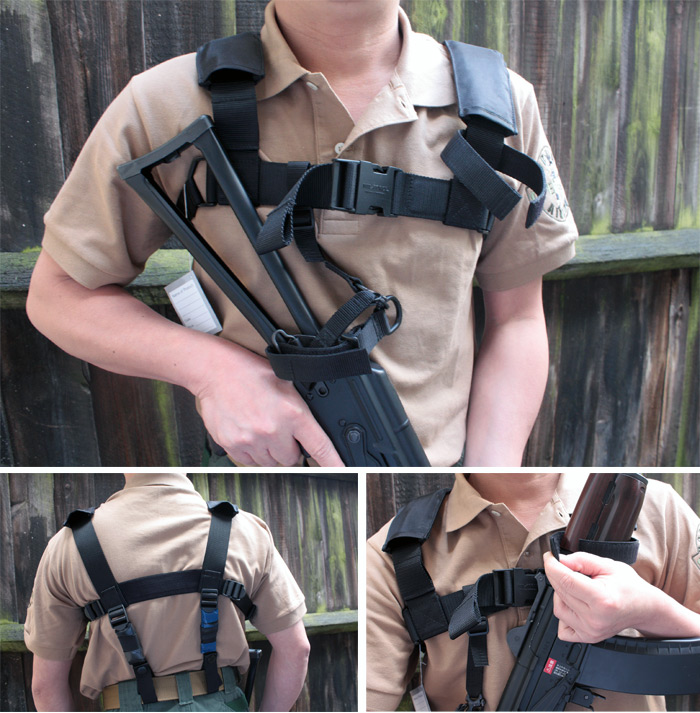 Adjustable to any chest size, you can secure the back area of the MF GS6 to your belt giving so that the rifle's weight up front can be supported and fully secure the sling to your body. Made of 100% Polyester P.P. Webbing, it is very sturdy.  The MF GS6 compensates for whatever you think that rifle slings lack.

It is totally ambidextrous as the QD sling and front-end velcro loop can be moved to accommodate left handed players/operators. Moving these is easy.  Releasing the rifle is quickly done by pulling the short strap below the rapid hook release system.

For those who are looking for a fighting load, the Mil-Force GS6 Tactical Sling does the job. As speed and manoeuvrability are essential in CQB and run and gun games, it will help you get that extra push you need to make that quick snap shot of the OPFOR.

Better check with your favourite airsoft retailer if they have this in stock. I totally love it!