The DroneDefender: An Anti-Drone Rifle That Brings Down Drones Safely 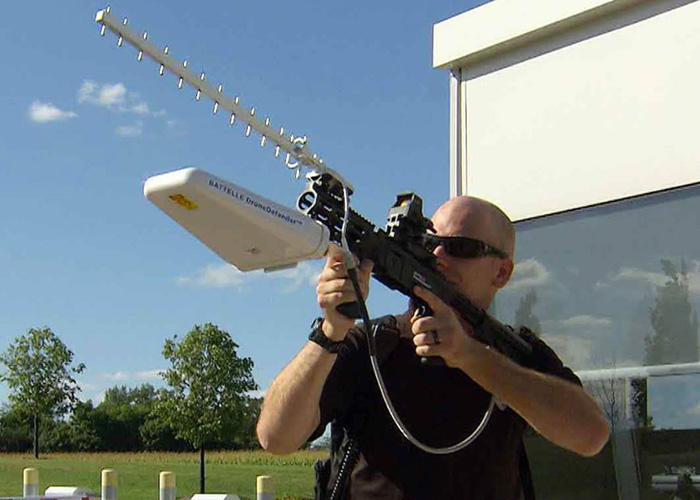 Previously, we posted about the story of a company promoting their ammo that can be used to shoot down drones. The product was produced as a response to the growing concerns of unregulated civilian drones flying overhead that can pose danger to people on the ground and aircraft up in the air. Even more concerns for people is the invasion of privacy as drones are usually equipped with high definition cameras just like what one father did to a drone with his shotgun.

The problem with taking down pesky drones the old way of using guns is that they also would pose danger to people and properties below. Apart from that, if one misses a drone, a stray bullet would be fatal to an unwary pedestrian on the ground.

Now, there is one way to bring down drones in a safe and even non-intimidating manner. Batelle Innovations, based in Columbus, Ohio, have announced an anti-drone device that can be used safely without destroying the drone and prevent people from getting hurt from a falling drone.

Called the Drone Defender, the photo above looks like an AR at first glance but with the additional contraptions such as what looks more like an antenna, you wouldn't blame people if they call it a ray-gun, as that description is not exactly far from it.

The DroneDefender shoots radio waves at flying drones up to distances of 400 meters and tuned to the common GPS and ISM frequencies. If you can call this jamming, it may well be. Drones nowadays have their safety features and once communications from their remote control/owner gets disrupted, the drone either lands on its own or goes on automatic mode and returns from what it knows to be its point or origin.  The disruption of communications also would prevent remote detonation of the drone in case it was designed to be more of a weapon rather than a privacy nuisance.

Weighing 10lbs., the DroneDefender has a start time of  <0.1 seconds and can operator continuously for five hours. It can be set on different configurations, from a handheld high-tech rifle option, to being mounted on fix emplacements or vehicles for VIP/convoy protection. It will be offered for government use, mainly military and law enforcement organizations, no idea if civilians would get their own drone zappers with this.