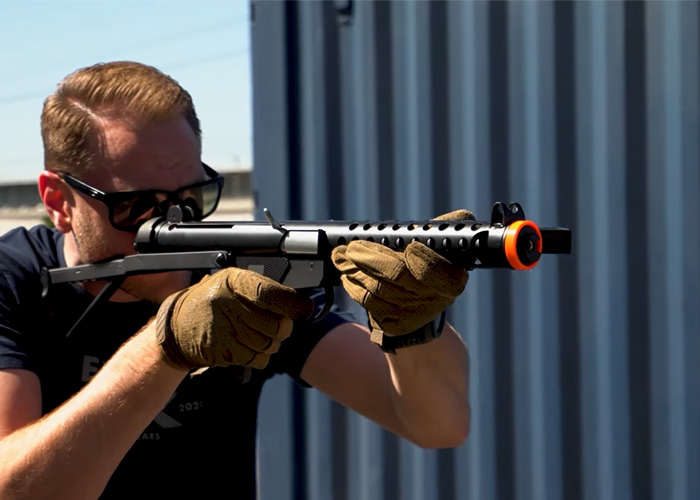 The Sterling L2A1 features full steel construction, realistic welding, superb detail, and a high performance 9mm lipoly ready metal gearbox. The manufacturer has done an exceptional job at recreating this 1 to 1 scale replica as an AEG. The gun boasts a noticeable heft in its overall weight. The entire AEG feels rugged and sturdy and features excellent attention to detail to make this replica as accurate to its real counterpart as possible; including its very unique folding stock. This is a great weapon for any collector, re-enactor, or cosplayer who is looking for the most accurate reproduction available.

The most notable and possibly most famous use of the Sterling sub-machine gun was in the original Star Wars films by Lucas Arts. Used as a base gun and then modified with various props, the Sterling L2A1 eventually inspired the BlasTech E-11 Blaster Rifle used across the Galaxy and issued to Imperial Stormtroopers.

While the Sterling L2A1 sub-machine gun was not a widely known or used weapon during World War II, it was still seen as a significantly improved weapon over the Sten sub-machine gun used by British infantry. The stamped steel weapon was submitted for trials to replace the Sten in early 1944 and soon found its way into select airborne units towards the end of the war. The Sterling was a far superior weapon boasting greatly improved accuracy and reliability as well as being incredibly light weight and compact thanks to its unique folding stock. The weapon remained in use up until it was phased out in 1987 by the introduction of the L85A1 assault rifle."